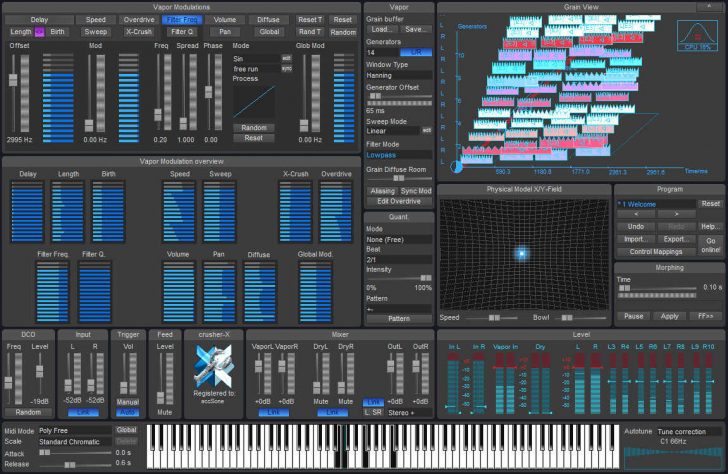 crusher-X version 6 will again present a couple of features that are unique in the world of granular synthesis: Besides the grain processing innovations “X-Crush” and “Overdrive” the new “Diffuse” processor will generate up to 10 independent reverbs inside the grains. The “reverb memory” will be taken from one grain to another and diffuses the grain content but not the grain output. This unique process will generate laser sharp grain edges while a warm sound environment is created at the same time. The reworked “Sweep” processor allows spline- and step-modulated grain-pitch runs.

In version 6 grain generators can now be modulated with the new “Spread” parameter that modulates with different frequency offsets for each generator. This leads to very intensive, pulsing, diverge and converge grain modulations. In addition, new modulation types like “Random Sync”, “Sample & Hold” as well as “Follow Pitch” are provided. All modulations can be synced to the host beat and besides the spline-editor as a new step-editor is introduced.

The new “Autotune” feature generates pitch aggregations and compensations via the grain engine while forcing tuning towards specific scales. The unique autotune modus “Force to Base Tone” steers the grain-engine so that the output pitch is nailed down to a single tone independent from the input signal pitch.

The UI is reworked and a new vapor modulation overview shows all modulations in parallel. More than 130 included patches are ready to be used by sound-designers, film score composers, DJs and experimental guitarists.

Here’s a preview of Crusher-X in action: