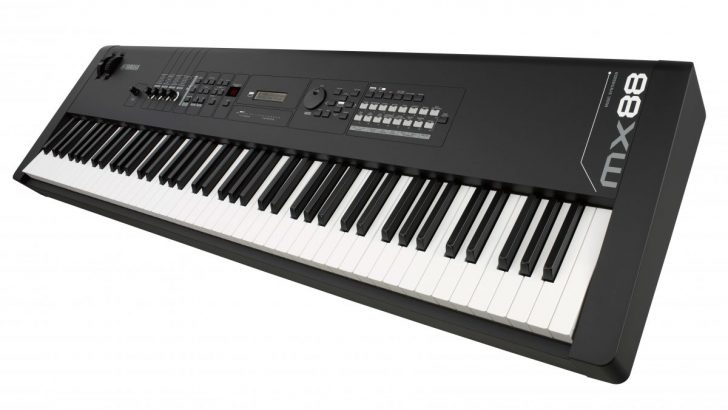 Yamaha introduced the MX88 – the latest addition to their MX line of synthesizers – at Superbooth 17.

Yamaha says that the MX88 represents the logical extension of the MX line, offering a full-size keyboard with piano-style action.

The sound collection of the MX88 is based on the Yamaha Motif sound engine, and contains everything from synthesizer leads and pads to realistic acoustic instrument sounds. The Concert Grand Piano sound has been optimized for the MX88 keyboard to provide the highest level of expression.

The Yamaha MX88 connects easily to both Mac OS X and Windows computers via a class-compliant, bi-directional USB audio/MIDI interface. This makes it easy to record into a DAW, and you can also monitor the computer’s output through the keyboard’s ¼” audio outputs or headphone jack.

Other key features on the MX88 include:

‘The MX88 will appeal to players who need the touch and feel of a real piano with 88 weighted-action keys,’ says Yamaha Product Marketing Manager Nate Tschetter. ‘Now, any keyboardist can take advantage of the computer and iOS integration and superb Motif sound that distinguish the MX line in the market. ‘