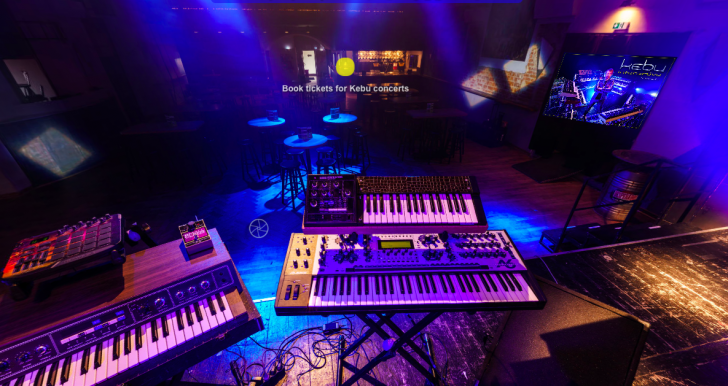 Finnish synthesist Kebu (Sebastian Teir) has shared a new interactive website that lets you explore his synth rig, from his vantage point, and hear the role played by each synthesizer.

Kebu’s Synthesizer Playground was created by photographer Daniel Hertrich, and lets you experience Kebu’s live performance rig with your Web browser or via VR.

Hertrich shot the images in high-res, so you can see the details of each instrument. And Kebu provided solo tracks for each synthesizer, so selecting a synth lets you solo it and mute the other synths.

Hertrich shared some of the technical details via his site:

Each 360° scene is compiled from 32 individual photos, with 42 Megapixel each. Considering the overlapping that’s necessary for successful image stitching, this results in an overall resolution of 670 Megapixel per spherical scene.

Kebu’s songs „Perplexagon Part 2“, „To Jupiter and Back“ and „Le Carneval des Étoiles“ build the musical background for the three scenes. And these are also the songs that the visitor can „play“ virtually by interactive triggering of their solo tracks.

The gear and software that was used:

Adobe Lightroom (screenshot) for basic development of all individual images