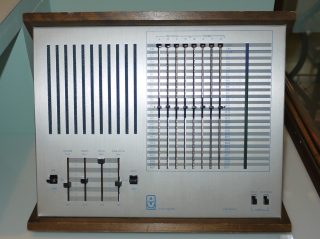 The original Muse was invented by Marvin Minsky and Edward Fredkin at MIT around 1969. The device has a limited array of sliders and switches, but they control algorithms that can generate very long patterns of notes. The sequencer controls a very basic electronic voice.

The virtual version of the Triadex Music is implemented in HTML5 and Javascript.

Future Retro has a modern sequencer, the Zillion, that’s inspired by the algorithmic sequencing of the Muse.