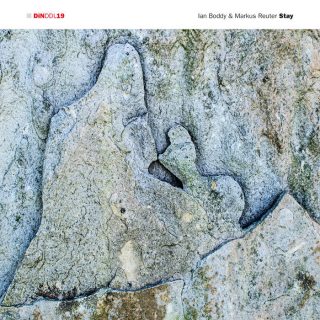 Synthesist Ian Boddy and guitarist Markus Reuter have a new collaboration out on the DiN label, Stay.

Boddy is known to many for his long list of solo releases; collaborations with the likes of Robert Rich, Erik Wøllo & Mark Shreeve; and his work as the head of electronic label DiN. Reuter is a psychologist, musician and label owner; has a large list of solo releases and collaborations; and founded the company Touch Guitars to create new guitars tailored to touch-style performance.

Their new album, Stay, builds on some unreleased material recorded during sessions for their previous album, Memento. Boddy and Reuter used it as a starting point for creating the new album, which features six ambient soundscapes.

On Stay, Boddy plays keyboards, Serge & Eurorack modular, while Reuter creates soundscapes using a Touch Guitars AU8. Each of the tracks is built on the foundation of one of Reuter’s looped touch guitar soundscapes and Boddy’s analog modular sounds.

Here’s a preview of the album’s title track, Stay:

We asked Boddy if he could tell us a little about the technical details of his synth work on the album, and here’s what he told us:

What’s perhaps particularly interesting from a synth point of view here is my use of modulars to accompany the beautiful touch guitar soundscapes that Markus conjures up. The opening track features me playing on my Analogue Systems French Connection keyboard, which as you probably know mimics the playing mechanism of the Ondes Martenot.

But the real sound of this album is my Serge system with the patch I came up with using the Triple Waveshaper module. It’s most noticeable on the tracks, Vesper, Aeolian & Stay.

Here is a demo of his patch from the title track, Stay, in isolation:

You can preview Stay via the embed below and it is available via the DIN site.