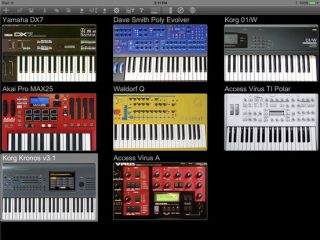 Sound Quest has released MidiQuesti, an iPad version of its MIDI Quest editor/librarian.

Midi Quest supports over 630 of the most popular MIDI instruments and devices, from over 50 different manufacturers, including Korg, Roland, Yamaha, Kurzweil, Alesis, Waldorf, Kawai, Akai and E-Mu. It lets you store, organize, and edit patches, banks and more.

Midi Quest “talks” to each MIDI device individually, so it can simultaneously send SysEx to as many as 250 different instruments and still edit another instrument – all at the same time.

MidiQuesti is available now as a free download. Support for individual devices, though, is added via In-App purchases. A list of supported devices, along with info on In-App pricing, is available on the Sound Quest site.