RØDE Microphones has announced that its NT-SF1 360 Surround Ambisonic Microphone is now shipping.

SoundField pioneered 360° surround-with-height audio capture in 1978. The company was acquired by The Freedman Group, home of RØDE Microphones, in 2016. The SoundField by RØDE NT-SF1 marks the first collaboration between the two brands. 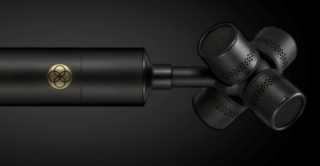 The NT-SF1 comes with a blimp-style windshield and fur cover for intensive wind protection, and a shock mount for steady recording.

The Microphones record in A-Format but it is the conversion to B-Format that allows a single Ambisonic Microphone to provide 4 tracks that can be manipulated in any direction in post, possess any polarity possible and enable creators to place their sounds wherever they like within the 360° soundfield.

The SoundField by RØDE Plugin is also available for free download on both Windows and Mac. It lets users to reshape their audio.

The Plugin offers standard surround-sound set-ups, including Dolby Atmos up to 7.1.4 and is supported by Protools, Q-base, Nuendo, Reaper and Logic in VST, AU or AAX formats.