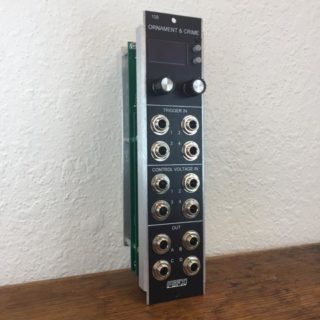 Jason Fry of Free State FX has introduced a 1U width Ornament & Crime module for dotcom-style 5U modular synthesizers.

The Ornament & Crime module, originally released for Euro systems, is a polymorphic module that can function as a powerful quantizer, sequencer, envelope generator, Euclidean Rhythm generator and more.

It’s basically a little computer in a module – with a fixed set of user controls, and signal inputs/outputs. What the encoders do, and how the inputs are used is specific to each application. An OLED screen is used for navigation, as well as monitoring outputs.

Free State FX previously released a 2U width version of the module.

Here’s a series of video demos of the Ornament & Crime (in Euro format) via Voltage Control Lab:

The Free State FX Ornament & Crime is available to pre-order for US $395.