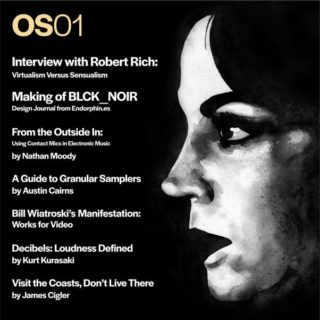 Open Source 01 is a new journal of synthesizer culture, art and technology.

The publication was created by Distortion Productions, along with collaborators around the world. It combines a print magazine with music, software and more on digital media.

Here’s what Distortion Productions’ Danny Kim told us about the new journal:

“Open Source is a collectible, limited edition art catalogue rather than a traditional magazine.

We’re interested in balancing the artistic and creative aspects of music production with technical discussion. Other mediums such as modular visual art and music history are also of interest.

From the start, it was important to keep Open Source only in physical print. I’d like people to be able to hold it in their hands and see the artwork on the highest quality printed material available. The included 4GB microSD card is loaded with two full-length albums, music videos and five original modular patches.

It doesn’t make a lot of sense to do a print-only magazine in 2019, but so far, there has been almost universally positive responses to people who have seen the magazine in person.

We tried to make the content timeless, so that an issue could be read years from now and still feel relevant.”

Kim plans on publishing future editions on a flexible schedule:

“I’m tentatively planning the second issue for a fall/winter 2019 release. There are no deadlines, we will publish when there’s enough quality articles and content for readers. I’m exploring different topics and talking to a couple designers for the next magazine right now. We may also put on an accompanying show for the 2nd edition.”

Open Source 01 is being printed in a limited run of 200 issues. It will only be available in physical print at retail/online locations for $30 USD/28 Euro.

You can find Open Source now at: