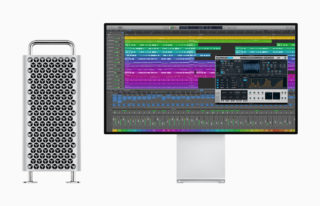 Apple has released a new version of Logic Pro X, its professional music production software, with performance optimizations for all users and updates to take advantage of the potential of the company’s recently introduced Mac Pro systems.

Logic Pro X 10.4.5 will now support up to 56 processing threads on the Mac Pro, allowing you to run up to five times the number of real-time plug-ins. Logic Pro X 10.4.5 also increases the available track and channel count for all users, now supporting up to 1,000 audio tracks and 1,000 software instrument tracks, four times what was previously possible.

The updates could simplify systems for musicians with very demanding requirements, by allowing more tracks per machine, and minimizing the need for secondary machines.“

In addition to the performance enhancements, the new version delivers several feature updates:

Logic Pro X 10.4.5 is available now as a free update for all existing users, and is available on the Mac App Store for $199.99 (US) for new customers.