The System 700 from 1976 was the most expensive instrument Roland ever made. A comprehensive, semi-modular monster that was at the cutting edge at the time, the full system cost the equivalent of around £35,000 – £45,000 (around $45,000 – $50,000) and as they made so few of them; they have been known to sell for even more than that on the rare occasions that they emerge on the second hand market.

Huge thanks to the owner of this remarkable instrument for the very generous loan.

We have the main console and two of the “blocks” present, but the full system has two further wing cabinets containing six additional VCOs, two further filters, three further VCAs, six further envelopes, another LFO, S/H, mixer and two further multiple jacks. In addition it has a twelve stage, three-channel sequencer that also acts as a switching mixer.

With the three blocks I borrowed I do have all of the modules present with the exception of the gate delay and I can use alternative sequencers in place of the original, so I feel this is a full representation of this marvelous instrument and what it can do. 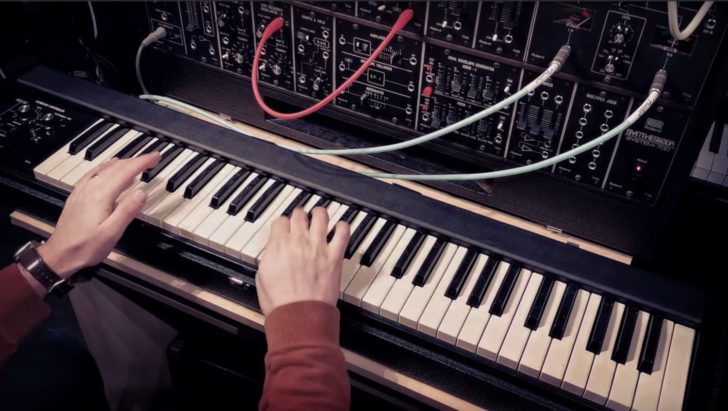 Here’s what Ball has to say about the technical details:

“The bass sound heard playing the verse riff was created using one oscillator at 32’ with the other two oscillators at 16’. The oscillators then all went on to their own discrete filters and VCAs and came back into the 711A module where they were panned center, left and right respectively. This gave me a true stereo bass sound with individual voice articulation.

I ran a guitar through the amplifier and sent that to the two-channel phase shifter in the verse sections and then the two-channel audio delay in the final chorus. I also used the envelope follower (with integration / lag) that tracked my guitar signal so I could modulate the filters from my strumming.

The lead sound had different left and right signals utilising phase sync to the left and ring modulation to the right, all topped off with the usual LFO, S/H and envelope mod of the filters for further colouring.

The 701A keyboard can send out two control voltages (an old 70s trick) and so I could play duophonic parts. However, I also realised the third oscillator would still track the keyboard with low-note priority, so I tuned it up a fifth and then played some two note diads and got a bonus third note. As this creates chords that you wouldn’t come up with if you were playing a normal polyphonic instrument (and probably couldn’t play), it unveiled some interesting voicings that are heard in the breakdown chorus and end chorus. They’re also not equally tempered, which adds some detuney loveliness. I ran one channel through a Korg Stage Echo for even more vintage bliss.

In the second verse I used the interface that will convert a pitch to a CV and simultaneously create an envelope and gate signal from an external source. Via this module I was playing the 700 entirely from my guitar – oscillators, filters, amplifiers etc, which created another different sound and type of articulation.

The little blippy sequences were running through the multimode filter bank that has four resonant filters running in parallel.

I created some analogue drum sounds but I also processed my TR-707 through a Maxon RM-60 as I’ve demonstrated in previous videos. The 707 was running over midi.

Also, I’m pretty sure I accidentally stumbled upon something similar to one of the blaster sounds from Star Wars, I think it’s the AT-ST blaster from Return of the Jedi. If you listen you’ll catch it twice in the track.”