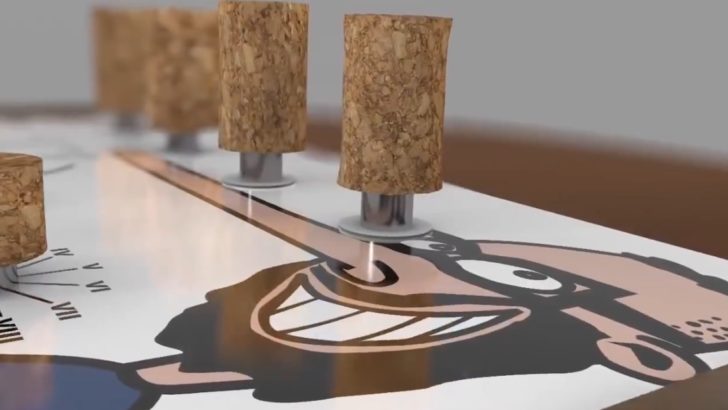 Behringer shared a video that used name-calling and ridicule to bully Kirn. The professionally-produced video introduces a new product, the ‘Kirn Cork Sniffer’ that features a caricature of the journalist.

The video is the culmination of months of escalating attacks on Kirn, including name-calling, harassment, online abuse and ridicule. Most recently, Behringer has used its social media channels to announce multiple attacks on Kirn:

Their latest attack, the ‘Kirn Cork Sniffer’ video, features a caricature of Peter Kirn that many viewers interpreted as an anti-Semitic attack. The Jewish name ‘Kern’ and its variants are derived from ‘kern’, a German and Yiddish word for grain or seed.

That perspective is shared by others.

Red Means Recordings’ Jeremy Blake writes, “Today Behringer decided to create a personal attack parody product with strong anti-Semitic overtones, because the subject of the parody wrote an article about them.” 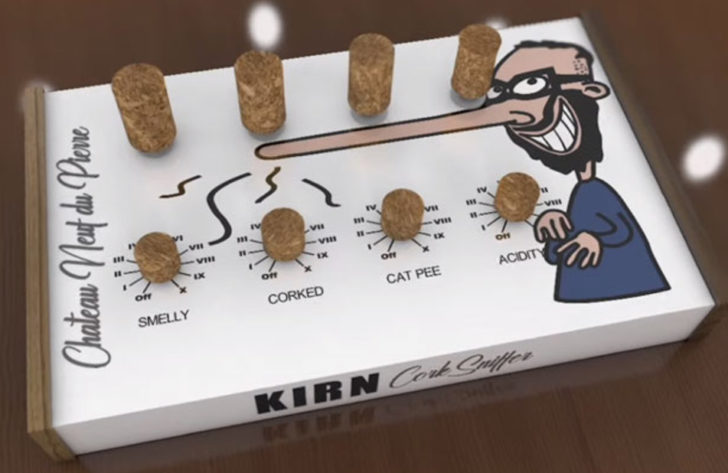 Some have noted similarities between Behringer’s caricature image and the “Happy Merchant” image, right, one of the most widely-used anti-Semitic memes among white supremacists.

At Sound On Sound forum, johnny h writes “It’s impossible to ignore the antisemitic overtones used in the image. Kirn is a Jewish surname, and here you have the classic 1930s tropes of the beard, big nose, wild eyes, sinister grin and money grabbing hands.”

“I have given Behringer a good deal of benefit of the doubt in the past, and even said some nice things about them, as controversial as I know their business practices are. This, however, is beyond the pale,” writes author and Keyboard Magazine Editor Stephen Fortner. “Behringer’s original posts referred to Pinocchio as the reason for the long-nose cartoon image, but it is frighteningly close to anti-Jewish caricatures used in Nazi propaganda.

“Uli, if a marketing team did this without your say-so, fire them immediately,” adds Fortner. “If you approved of this and you’re behind it, plead temporary insanity. Otherwise, I call upon Chuck Surack of Sweetwater, the folks at GC and Musician’s Friend, Long & McQuade, Beacock, Sam Ash, and every other retailer who matters in North America to not carry Behringer products.”

Kirn has since stated that he is not Jewish, adding “I have an added obligation to listen to Jewish friends who raised those concerns.” But Kirn did find the series of attacks disturbing.

“The whole sequence of events worried me,” Kirn told Motherboard. “If a joke doesn’t make sense, then you have to assume it may be intended as a threat and try to respond accordingly.”

Uli Behringer responded to the video’s backlash by posting a message on Facebook, apologizing for his marketing team and adding “In no way did the team ever intend to make any connection to semitism, as some people have alleged.” Behringer has deleted the apology.

Why Is Behringer Attacking Peter Kirn?

The latest attack on Kirn appears to been the result of months of planning.

In January, Behringer announced that they’d trademarked the ‘Kirn’ name, and teased “Any clue what we have in mind with it?”

In addition to registering the trademark, Behringer created a caricature drawing, created a synth prototype, recorded a voiceover, filmed and edited a video and then promoted it on social media.

Ironically, this is more effort than they put into some of their actual product introductions.

Why would the head of one of the world’s biggest music technology manufacturers authorize a personal attack of this sort, let alone have his staff take the time – over several months – to make it?

Kirn’s site, Create Digital Music, has in the past covered Behringer product news, but has also covered some of the company’s controversies.

A ‘SLAPP’ lawsuit is “a lawsuit that is intended to censor, intimidate, and silence critics by burdening them with the cost of a legal defense until they abandon their criticism or opposition.”

Behringer/Music Group sued the forum users for calling the company’s products ‘copies’ and ‘knockoffs’, among other things. The company’s complaint asked for $250,000 in damages, plus punitive damages and court costs. The documents are available at the Court’s site.

The attack on Peter Kirn follows shortly on an odd recent post on the Behringer Facebook page, where company founder Uli Behringer dismissed people that criticize their products or business practices as ‘haters’.

Beyond dismissing critics as ‘haters’, the company head complains “There is not one magazine, forum or thread where we don’t get criticized or even attacked.”

There’s an element of truth to Behringer’s complaint. But – coming from the head of a huge, ruthlessly competitive company – the complaint comes across to some as whining.

“You said recently in a post that you can accept criticism from social Media and and music press, but this shows the exact opposite.

If you want peoples respect go and earn it.”

Beheringer has earned a lot of fans for its line of inexpensive knockoffs of classic synths. Can they earn your respect? Share your thoughts in the comments.

After the backlash against the ‘Kirn Cork Sniffer’ video, Behringer deleted the video and their references to it on social media.

“What was meant as pure satire by our marketing department, has clearly offended some people and looking at the video, I could understand why. However, in no way did the team ever intend to make any connection to semitism, as some people have alleged.

We unreservedly apologize to Peter and anyone who felt offended.”

The video has been reshared by third-parties on several sites.

Update 3: Additional details about previous attacks added for clarity. Updated post to note Kirn’s statement that he does not identify as Jewish.