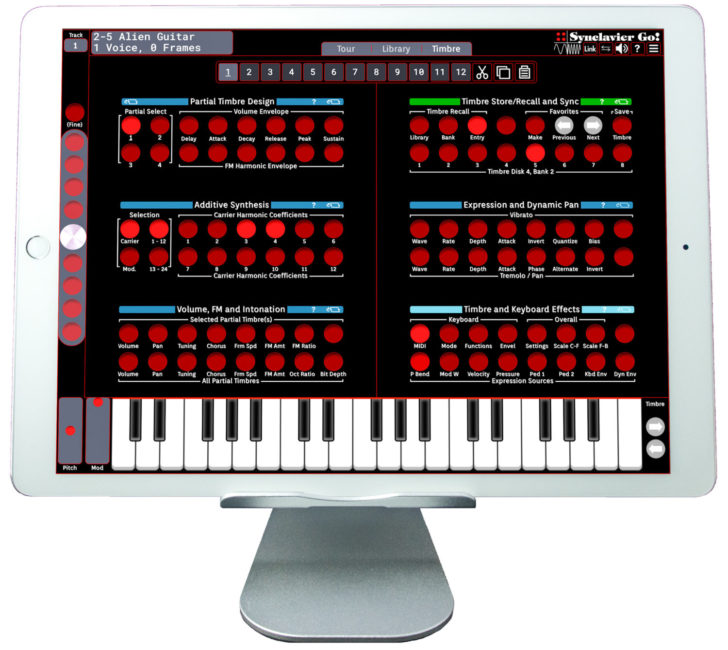 Synclavier Go!, the iPad port of the Synclavier sound engine, has been updated with AUv3 support and sample import.

Here’s what they have to say about the update:

It is now possible to load an iPad-compatible DAW (Digital Audio Workstation) — such as Apple’s own GarageBand, Blip Interactive’s NanoStudio 2, or Steinberg’s Cubasis 3 — and insert multiple instances of Synclavier Go! as AUv3 clients, making it a much more appealing app in itself. Ultimately, users can play and record Synclavier Go!, mix it with other instruments, add inline effects, swap sounds in and out of the mix, and modify compositions with ease… and all from within a single app.

All settings are recalled when saving a project in the DAW and loading it up again at a later date. It is an amazing environment to work in — far from being bogged down in the same way that weighty Mac- or PC-based DAWs often are. And, of course, it is more cost effective — so much so that maybe the ‘Twenties’ will be the decade which will witness a hit record realised on little more than an iPad and a MIDI keyboard.

“Synclavier Go! was already a very capable app, but by adding the ability to load Soundfiles to Partials it’s hard to imagine that there can be a more capable digital synthesizer on any platform — be it a computer plug-in or hardware device, let alone an iPad,” says Synclavier Digital Marketing Manager Craig Phillip.

Synclavier Go!’s interface is necessarily deep with a steep learning curve by association. And yet once climbed it is highly rewarding. Readily going against the grain of today’s loop-based soundalikes, skilled operators of Synclavier Go! can creatively manipulate existing Timbre presets to quickly create new ones. On that very note, samples — Soundfiles in original ‘Synclavier-speak’ — can now be mixed into a Timbre to add richness and excitement to any sound.

Meanwhile, many of the same features available to Synclavier Go!’s additive synthesis sounds are available when working with Soundfiles — such as FM modulation, Tremolo, Vibrato, and Chorus — so sound design possibilities are seemingly endless as a result!

Enhancing Eighties-era Synclavier offerings with world-beating Soundfile capabilities could cost owners some serious money, so it is testament to the primitive computing power of the time that the necessarily lean algorithms used to process those samples still sound stellar. Indeed, it is those same algorithms at the heart of Synclavier Go! that lend the innovative iPad instrument app audacious power. Put it this way: the number of voices that can be played simultaneously more than adequately exceeds the amount of fingers that can play (or touch) the keyboard at any given time. This still holds true with Timbres that are fully loaded with Soundfiles and replete with effects! Splitting Soundfiles across keyboard ranges permit poly-sampled instrument usage to achieve more realistic-sounding results, while dynamic envelopes can also be applied, for instance, to set louder samples to greater keyboard pressures — perfect for working with today’s traction-gaining MPE control surfaces.