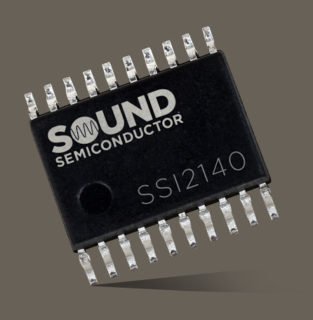 Sound Semiconductor has announced a major addition to its product family with the SSI2140, an improved version of the classic SSM2040 chip design, by original designer Dave Rossum.

The SSM2040 Voltage Controlled Filter is considered by many to be one of the best-sounding synthesizer filter ICs ever produced. It was notably used in the Sequential Circuit Prophet 5 Rev. 1 and 2.

“When we started this enterprise, a SSM2040 update was on our short list,” stated Dan Parks, President of Sound Semiconductor. “Dave Rossum was anxious to take this on, and as the project progressed he devised new ways to improve functionality. Early users have attested to preservation of SSM2040 sound, and some claim that Q Compensation ‘sounds huge’.”

Here’s what Sound Semiconductor has to say about it:

“Following completion of the SSI2144, which is an update to SSM’s other famous filter, Sound Semiconductor turned its attention to the SSM2040. First and foremost, the basic transconductance core was left unchanged to retain its sound characteristics. However, process technology and design know-how advances permitted the addition of new features.

Like the SSM2040, the SSI2140 contains four independent transconductance cells that can be connected for a wide variety of filter pole and mode configurations such as low-pass, high-pass, all-pass, band-pass, Sallen & Key, State Variable, Cauer, and many others. To improve temperature sensitivity, gain core cells are temperature-compensated.

Similarly, optional temperature compensation is available for the exponential port that provides a wide range of control using the SSM2040’s same constant of -18mV/OCT.

A major addition is an on-chip “Q-VCA”, also temperature compensated, that allows easy control of resonance (“Q”) and supports numerous optional Q compensation schemes to overcome attenuation of passband frequencies as resonance increases. Should the Q-VCA not be needed for resonance or compensation, it can be put to work for traditional VCA or VCF applications such as, for example, a single-pole high-pass filter.

Finally, like the SSM2040, the SSI2140 has an input overdrive characteristic that many believe contributes to the filter’s coveted sound.

Due to a different package type and pin connections, the SSI2140 won’t directly retrofit SSM2040 PCB positions, but third parties are already developing adapter boards. One outfit has even developed a single board to adapt the SSI2140 to Rev. 3 Prophet 5’s.”

The SSI2140 is offered in a 20-lead Shrink Small Outline Package (SSOP). Priced at $1.18 for 1000 pieces, the SSI2140 is in stock for immediate shipment. Samples are available to qualified OEMs; hobby and DIY enthusiasts are served through Sound Semiconductor’s authorized resellers.