Off-topic, but jaw-dropping: The biggest news of the day is The United States Department Of Justice announcing the arrest of Ilya Lichtenstein, 34, and his wife, Heather Morgan, 31, of New York for allegedly conspiring to launder $4.5 billion in stolen cryptocurrency.

“In a futile effort to maintain digital anonymity, the defendants laundered stolen funds through a labyrinth of cryptocurrency transactions,” said Deputy Attorney General Lisa O. Monaco. “Thanks to the meticulous work of law enforcement, the department once again showed how it can and will follow the money, no matter what form it takes.”

The duo are accused of conspiring to launder cryptocurrency that was stolen during the 2016 hack of Bitfinex. Law enforcement officials have seized over $3.6 billion in cryptocurrency linked to that hack. According to court documents, Lichtenstein and Morgan allegedly conspired to launder the proceeds of 119,754 bitcoin that were stolen from Bitfinex’s platform after a hacker breached Bitfinex’s systems and initiated more than 2,000 unauthorized transactions.

What make the story truly bizarre though, is that the accused Heather Morgan is also music producer and ‘infamous Crocodile of Wall Street’, Razzlekhan.

Razzlekhan Is Like Genghis Khan, But With More Pizzazz 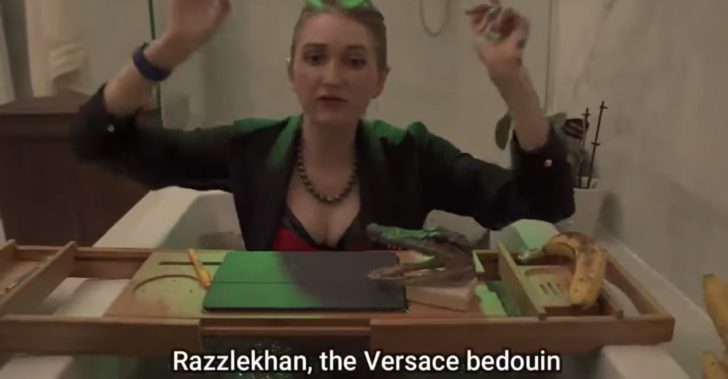 According to her site, Razzlekhan’s style “has often been described as ‘sexy horror comedy,’ because of her fondness for combining dark and disturbing concepts with dirty jokes and gestures.”

But Morgan’s most important Razzlekhan track is probably The Versace Bedoin, which she says “represents who I am”:

While some of these claims can’t be easily be independently verified, Morgan is a former contributor to Forbes magazine. And Morgan’s Linked In profile states that she is Chief Executive Officer at SalesFolk, which helps “B2B sales teams create highly personalized email templates at scale”.

As to her rap skills, Rolling Stone notes that “all of Morgan’s videos suggest that she has no understanding of flow whatsoever”, adding “To call any of this music is a bit absurd.”

While some may argue that Morgan’s real crime was against rap music, ‘sexy horror comedy’ doesn’t come with federal charges yet.

“In a methodical and calculated scheme, the defendants allegedly laundered and disguised their vast fortune,” said Chief Jim Lee of IRS-Criminal Investigation (IRS-CI). “IRS-CI Cyber Crimes Unit special agents have once again unraveled a sophisticated laundering technique, enabling them to trace, access and seize the stolen funds, which has amounted to the largest cryptocurrency seizure to date, valued at more than $3.6 billion.”