Soma Laboratory has introduced Terra, a new synth that they describe as a “highly conceptual device”.

Behind the extremely simple interface hides a complex polyphonic, microtonal synthesizer, with a broad and flexible sound palette that ranges from classical beautiful tones to complex atonal noise, and offers smooth and fast transitions between these extremes.

The keyboard design invites new playing techniques and covers the full range of a grand piano, with the possibility to tune each note with an accuracy of 125 steps per semitone.

The keyboard consists of 12-note sensors, with velocity and pressure sensitivity allowing for the manual creation of slow attack and vibrato, 4 dynamic sensors for timbre modification and control, 4 pitch-shifting sensors and 2 hold sensors for holding the state of the timbre and note sensors.

“Terra is our dream about a bright future where we will be both technologically advanced and more connected to nature,” they note, “where machines and technology are not a prison for our feelings and spirit but their extension.” 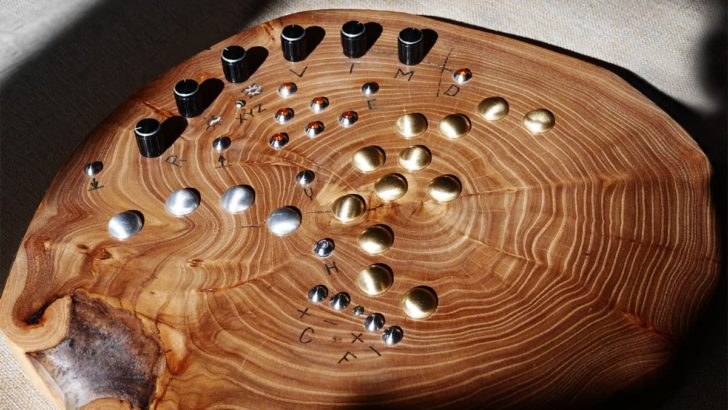 Inside Terra there is a three-axis motion sensor for creating a variety of different modulations by simple intuitive movements of your hands and body.

Terra is digital and contains 32 complex synthesis algorithms. Each algorithm has been carefully designed to be a complete and flexible musical instrument on its own, ready for learning and playing in its own unique way. The goal is to free the musician from long exhausting programming, setting hundreds of parameters for creating one timbre, and instead putting the focus directly on music and performance and following your imagination and inspiration.

Terra has a simple interface that gives you instant access to all its functions in several touches, including saving and loading the 96 presets that are stored directly on the playing sensors. Terra has no display. Instead it shows and lets you dial all necessary data on the 6 LED-sensor triangle in the center.

The housing of Terra comes from a solid piece of wood, making each instrument unique and slightly different. In the photo above and in the announcement demo video you can see the prototype of the synth.

Pricing and availability is to be announced.