All ticket sales go to support the Foundation’s mission of inspiring future generations of innovators through the intersection of science, music, and technology.

The Minimoog that’s featured in this raffle isn’t just signed by an icon. It belonged to Billy Joel’s musical director, David Rosenthal, a keyboardist, synth programmer, and orchestrator. He’s formerly of the rock group Rainbow, and has toured with Cyndi Lauper, Robert Palmer, and Enrique Iglesias and others. He’s been the musical director and keyboardist for Billy Joel’s band since 1993.

The estimated value of the instrument, even without the signature of a celebrated musician, is in excess of $10,000. 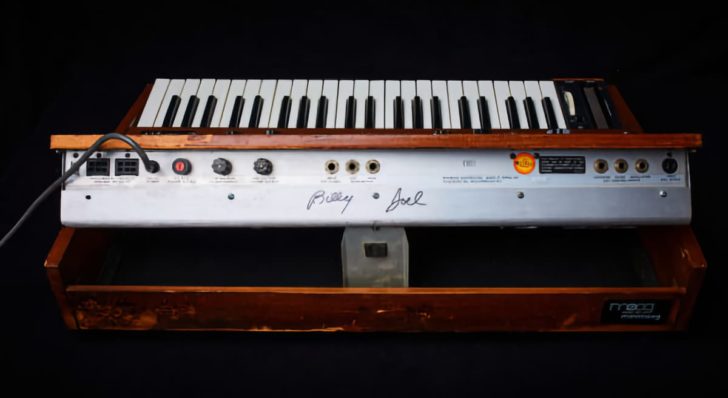 This unit’s serial number is 8486. It was final-tested on Jan 17, 1977. Besides the pitch ribbon update described above, this unit also has the version 3 oscillator update. This oscillator upgrade would not have been installed in the factory until roughly 1979/80, and was a special-order option for those with earlier production units who wanted rock-solid tuning.

Due to the desirability of this classic synth, its signature from Billy Joel, and rock ‘n’ roll provenance with David Rosenthal and Rainbow, it will only increase in value. This Minimoog was fully restored by Synthpro Restorations, LLC, and is in excellent technical and physical condition, with minor physical flaws commensurate with the age of the instrument.

”The Bob Moog Foundation is proud to share this unique vintage Minimoog, signed by Billy Joel, a truly legendary musical figure who integrated the Minimoog into his music and performance decades ago,” said Michelle Moog-Koussa, Executive Director of the Bob Moog Foundation. “ In addition to Joel’s signature, the unique provenance of this Minimoog makes it a one-of-a-kind synthesizer – a collector’s item. We extend our deepest thanks to Billy Joel and David Rosenthal for their participation.”

Proceeds from the raffle will be used to support two key initiatives: