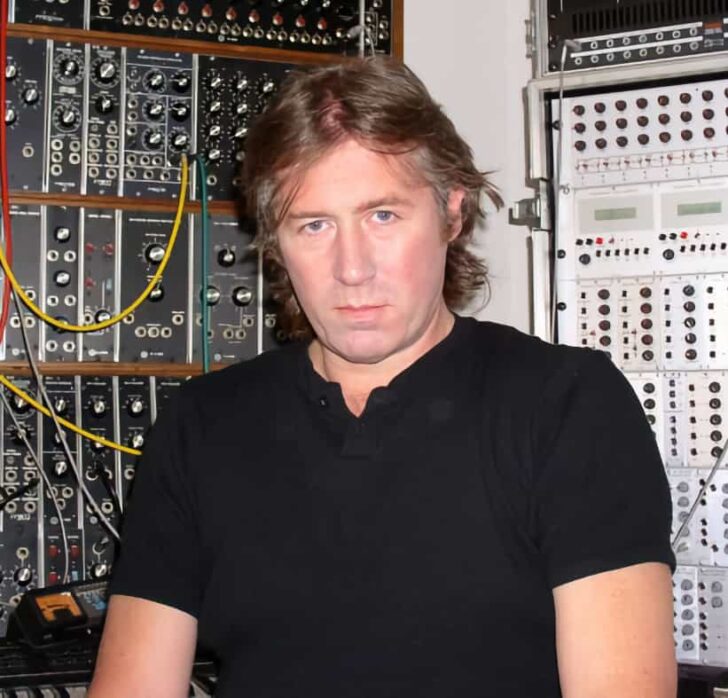 Shreeve was part of the first generation of synthesists inspired by the ‘Berlin School’ music of Klaus Schulze and Tangerine Dream.  He was prolific as a solo artist, starting with Embryo and Ursa Major in the ’80s, but is probably best known to synthesists for his work in the second-generation Berlin School groups Redshift and Arc.

The group released over a dozen albums, starting with the self-titled Redshift:

The music was composed and arranged by Mark Shreeve.

Redshift’s music owes an obvious debt to ’70s Tangerine Dream, contrasting ambient soundscapes with melodic sections, driven by propulsive sequenced Moog modular basslines. But Shreeve dug deep into the space carved out by TD albums like Phaedra and Rubycon, and demonstrated that there’s a lot more interesting musical territory to be explored.

Arc released a series of sophisticated second-generation Berlin School albums, most of which document live performances by the duo. Here’s an excerpt from 2009 from Arc’s live performance on the Stars End radio show, from WXPN Philadelphia:

“In these days, when so much live electronic music consists of a guy staring into the light of a laptop screen,” notes Echoes host John Diliberto, “It was a joy to watch Mark Shreeve bounding about his large modular synthesizer, throwing switches, moving patch cords, and twisting knobs, shaping and shifting his interlocking cycles of sound in real-time.”

Shreeve’s best known work, though, would be as one of the writers for Samantha Fox’s ’86 debut hit, Touch Me (I Want Your Body).

The hit came about as a bizarre stroke of luck.

“It was originally a 13-minute piece of ‘cosmic’ music dating from 1982,” explained Shreeve in a 1995 Sound On Sound interview. He put the original track together using a Sequential Pro One, Yamaha CS-30 and a Dr Rhythm drum machine.

“I didn’t know anything about the structure of pop music at all. Most of my compositions back then were about 15 minutes long.”

“When I was doing the Legion album, we started working up this track with all the others, but with the idea that we’d have some vocals on it,” he added. “They called in John Astrop, a producer and writer who had also been in a pop band. He went downstairs and came back with the ‘Touch Me (I Want Your Body)’ words. I thought to myself, ‘No one is going to buy this stuff in a million years’ — boy, was I wrong!”

The song was an international hit, peaking at #4 on the Billboard charts in the US.

Shreeve leaves behind a legacy of four decades of work, including dozens of albums and a wealth of music for listeners to explore.

14 thoughts on “Synthesist Mark Shreeve Has Died At 65”