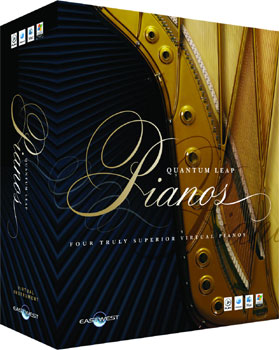 More than half a million dollars’ worth of pianos are included in this collection, all meticulously recorded. These include a $225,000 Bechstein D-280 Concert Grand, the same kind of piano engineer/producer Ken Scott used to record Elton John, David Bowie, and Supertramp. EASTWEST invited Scott to engineer the Bechstein’s close-mic’d recordings to provide users with a cutting, dynamic pop/rock piano sound, in addition to the variety of other piano sounds included in the collection.

“Quantum Leap Pianos is an innovative collection featuring the finest pianos captured with state-of-the-art recording equipment in a world-class studio,” Producers Doug Rogers and Nick Phoenix stated. “We personally own three of these pianos, and were able to match the sound of the Virtual Instruments to the sound of the actual pianos during production.”

The Quantum Leap Pianos library has 270 GB of content at 24-bit/44.1k resolution, the largest and most detailed piano collection ever created. Using lossless compression, the instruments, if all installed, use 140 GB of hard disk space. The sample management system offers 50% more efficiency compared to other piano collections.

Users can install one, two, three or all four pianos on their computer’s hard drive. Three microphone positions are included per piano for maximum flexibility. Ten to 16 velocities are offered per note (and again in soft pedal, sustain pedal, and soft sustain) and every piano offers 16 distinct staccato velocities.

Repetition samples are taken from 180 BPM performances for a true repetition sound and are not simply an alternate take. The software detects true repetitions. Pedal resonance was recorded for every note at multiple velocities, as well as with the soft pedal down. Proprietary resonance was captured on the Bösendorfer.

True multi-velocity soft pedal samples with and without sustain pedal are also included, as well as release samples with software envelope follower.

Articulations on each piano include:

The Quantum Leap Pianos library was recorded at EASTWEST Studios—formerly Cello Studios and site of the legendary United-Western Studios in Hollywood—with three user controllable microphone positions for each piano. Every sample was recorded in a proper piano environment with vintage Neumann microphones, a vintage Neve 8078 console, and Meitner analog-to-digital converters.