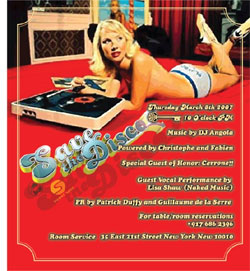 According to Cerrone, Save the Disco! is not another cheesy Disco Night, but rather, a true celebration of the genre’s glory days and how it’s influenced modern dance and electronic music.

Each month guests attending the event will have the privilege to welcome artists such as Lisa Shaw (scheduled down to perform Thursday, March 8), Sharon Jones and Jay-J, who are already booked. Dressed up staff, themed décor, drag queens and unique performances are planned for each month.

The goal of Save the Disco! is to build a regular party where guests become participants rather than spectators. Guests are highly encouraged to show up with the most extravagant 70s’ outfit – Afros and bell bottoms pants are a must-have!

More info at the Save the Disco! MySpace.

Music at its best is not in need of novelty; indeed, the older it is, the more one is accustomed to it, the stronger its effect.