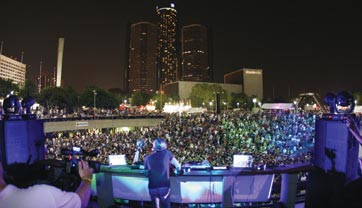 Moodymann (Kenny Dixon Jr.) is a Detroit techno/house artist known for his innovative use of reworked riffs, samples and grooves taken from the City’s historically influential jazz, soul, funk and disco scene. Rarely appearing live, his headlining performance at the festival is the first show in support of his upcoming studio album and will include a full stage show with a band.

Juan Atkins, who is widely regarded as the godfather of Techno, began in the 1980s recording what stands as perhaps the most influential body of work within the genre. Model 500 will headline the main stage on Sunday at the festival, highlighting the continuing influence of his music on a global scale.

Jeff Mills is a planetary superstar of techno, an unwearied hero of mega-events and an ace of the three-deck mix; his musical touch has been a force on this city’s dance scene for over 20 years. Jeff returns to Detroit to headline the festival with a main stage closing performance on Monday night.