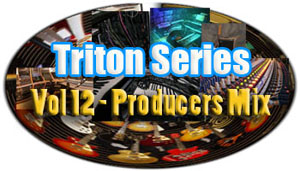 Kid Nepro, aka The Patch King, has announced the release of Vol #12 – Producers Mix for the Korg Triton Series Workstations.

Vol #12 – Producers Mix for the Korg Triton series is the culmination of seven years of programming and over two thousand programs and combis created for one of the most popular and beloved workstations ever released. The new soundbank consists of 128 programs and 64 combis designed to unleash the power of your Triton.

This will be The Patch King’s last set of sounds for the Triton series as they will soon be starting work on a new collection of sounds for Korg’s new M3 workstations. Look for the first release sometime this summer.

“We have enjoyed working with this amazing machine over the past seven years and now feel that it’s time to move on to the next step in the evolution of Korg workstations,” says The Patch King.
Producers Mix is compatible with all Korg Tritons including the Triton Classic, Triton Studio, Triton Extreme, Triton LE and Triton Rack.