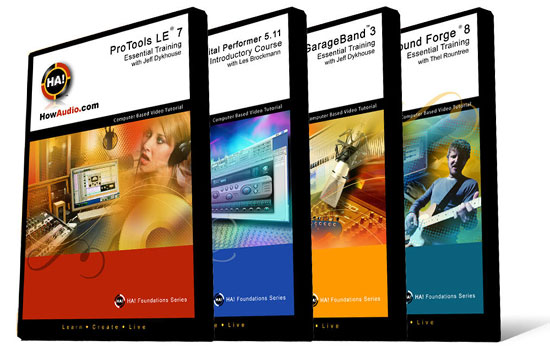 SoundForge 9 and Finale 2007 are currently in production and more titles will follow monthly.

The site offers a $19/month option for access to the videos, or a $199 annual option.
Here’s the descriptions for each of the new training series:

Pro Tools LE offers everything you need to create music affordably and with professional results. Pro Tools is widely used by professionals in music production, postproduction, TV and film scoring and serves as the defacto standard in said industries. Jeff Dykhouse, veteran audio engineer, takes a comprehensive look at each aspect of this powerful program. With the HA! QuickSTART Overview, you get the needed edge to be up and running quickly.

GarageBand is a software application developed by Apple that allows users to easily compose, perform and record their own music. In this tutorial learn just how easy it is to turn your Mac into a fully featured recording studio. Jeff Dykhouse walks you through mastering the interface, learning basic recording techniques, arranging a song, recording live instruments/vocals, editing and mixing tracks, adding special effects, podcasting and distributing your GarageBand compositions via the Internet or CD.

Veteran audio engineer Les Brockmann demonstrates that even though MOTU Digital Performer was originally designed for professional studio production, film scoring, live performance and remixing, that with DP’s advanced features and an intuitive streamlined design, it can be easily utilized for professional results for all levels of users from home recording enthusiasts to world-class recording studios. Les demonstrates how to record live instruments, record and import MIDI files, sequence and edit your finished project for export in a variety of different file formats.