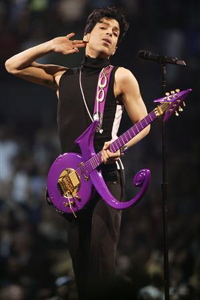 His royal purple badness, TAFKATAFKAP, aka Prince is pissing off the music industry by releasing his latest CD for free with a UK Sunday newspaper.

The Mail on Sunday revealed yesterday that the 10-track Planet Earth CD will be available with an “imminent” edition, making it the first place in the world to get the album. Planet Earth will go on sale on July 24.

“The Artist Formerly Known as Prince should know that with behaviour like this he will soon be the Artist Formerly Available in Record Stores,” said Entertainment Retailers Association co-chairman Paul Quirk. “And I say that to all the other artists who may be tempted to dally with the Mail on Sunday.”

“It’s all about giving music for the masses and he believes in spreading the music he produces to as many people as possible,” said Mail on Sunday managing director Stephen Miron. “This is the biggest innovation in newspaper promotions in recent times.”

“It would be an insult to all those record stores who have supported Prince throughout his career,” Entertainment Retailers Association co-chairman Paul Quirk told a music conference. “It would be yet another example of the damaging covermount culture which is destroying any perception of value around recorded music.