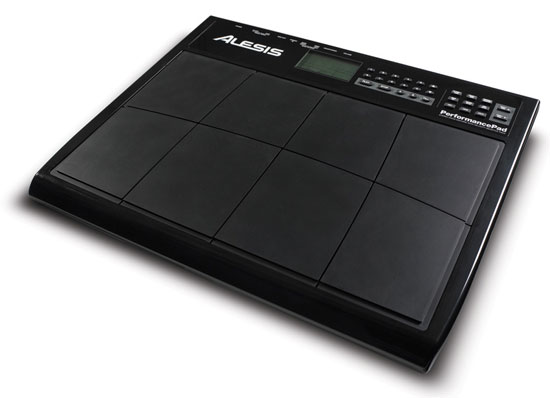 Alesis has introduced a cool new drum pad controller/drum machine, the Performance Pad. It’s a drum machine, an electronic percussion instrument and you can use it as a MIDI input device.

Performance Pad includes inputs for a bass drum pedal, hi-hat pedal, and a Line-level input to connect a CD Player, iPod, computer, or other audio device so that percussionists can play along with nearly any recorded mix. Built-in rhythm patterns are also included to compliment playing.

Dynamic Articulation technology is included to add nuance to the feel of every drum hit. In addition, there are industry-standard mounting holes on the bottom for easy attachment to an existing drum kit rack.

The 24-bit, high-quality headphone output on the Performance Pad insures a no-compromise playback experience without disturbing others. Connection to keyboards and sound modules is made simple thanks to the integrated MIDI output.

The Performance Pad is is due at music retailers late 2007. Suggested retail price is $399. Estimated street price is $299.