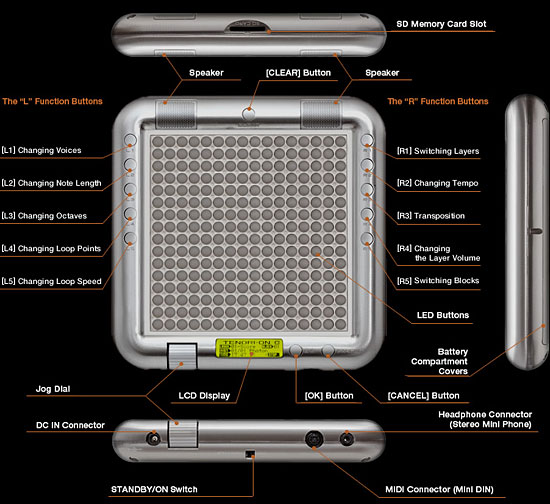 Yamaha’s unique Tenori-On musical instrument is being launched today at at Phonica Records, in SOHO, London. A second launch event will be presented by Futuresonic at Mint Lounge, Manchester on 5th Sep, 2007.

For those that can’t be there, here’s what you need to know:

The Tenori-On is a 16 x 16 LED button matrix performance instrument. For DJs & producers it is a unique performance tool enabling them create spectacular live & DJ audio-visual performances. Media artist Toshio Iwai and Yamaha have collaborated to design “a new digital musical instrument for the 21st century”.

Pricing is expected to be 599 UK pounds, with free shipping.

You can hear audio demos of the Tenori-On in action below. More demos at the Yamaha site.

Who is Toshio Iwai?

Toshio Iwai is a Japanese interactive media and installation artist, best known for his who has also created a number of commercial videogames. In addition he has worked in television, music performance, museum design and digital musical instrument design. He’s best known for his video game design for the Nintendo DS, Electroplankton. 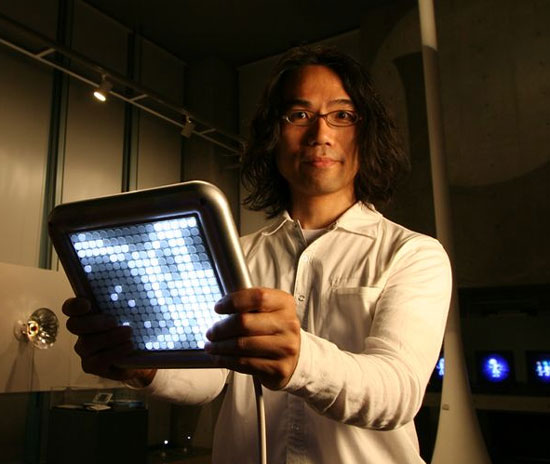 How Does It Work?

Tenori-On layers can be thought of as “performance parts” or “recording tracks.” The Tenori-On has a total of 16 layers. Separate notes and voices can be assigned to each layer, and all layers can be played together in synchronization.
The 16 layers are divided into six performance mode groups as shown in the illustration below. The six modes have different note entry methods and operation. Up to 16 layers created using different modes can be combined for rich, complex musical expression. Once complete set of 16 layers is called a “block.”

The Tenori-On can store up to 16 programmed blocks (16-layer groups) in memory, and you can switch from block to block instantly during performance.
You could, for example, create a musical composition in one block, then copy that composition to another block and edit it to create a variation of the original composition. Or you can load a number of previously-created compositions into separate blocks from an SD Memory Card and switch between them to create variation during playback.

Detailed information on the Tenori-On’s performance modes is available at the official site.