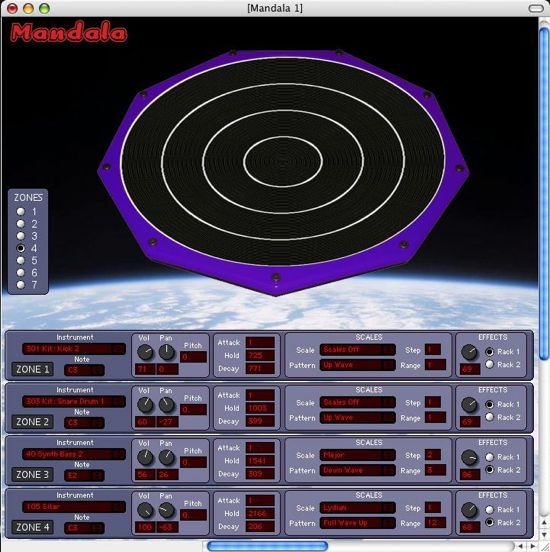 Synesthesia has announced Mandala 2.0, a new version of the high-def virtual drum and synthesizer, co-developed with professional drummer Danny Carey of the progressive rock band Tool.

Now a computer peripheral—its USB cable plugs into PC or Mac—the Mandala 2.0 emulates an acoustic drum. According to synesthesia, it’s only drum pad that knows exactly where it’s hit and how hard, across seven assignable zones—with an immediate trigger delivering the fastest-traveling sound possible.

A new kind of synthesizer, the Mandala 2.0 packages a musical range so wide it simultaneously offers players a top of the line, accurate model of a physical drum (via 3,000 professionally created, proprietary samples of the Black Beauty Snare Drum)—along with a library of sounds derived from more than 100 other instruments. In all, the Mandala 2.0 features four gigabytes of sound samples. It’s a synthesizer with drumsticks, with a drum pad so sensitive it responds even to a fingertip touch.

“The Mandala helps people find their rhythm—whether it’s the beat of a drum, or of a sound they haven’t yet created,” said Vince De Franco, Synesthesia founder and CEO, and inventor of the Mandala. “Use it as a compositional tool, or to create any sonic reality your heart desires. It’s got percussive sounds down cold—and that includes percussion instruments like the piano, the vibraphone and the triangle. Its range gives people a rich, satisfying way to experiment. It literally will be a different product for everyone who buys it. It’s the smartest thing you’ll ever hit with a stick.”

While most electronic drums have one zone in the middle that detects the strike, Mandala’s creators invented and patented a technology that enables the drum pad to detect the exact location and strength of every point of contact across the entire pad. With 128 concentric rings from the center to the edge—each offering its own sound variation—the Mandala offers unprecedented musical breadth. This high-def drum and synthesizer is bringing to percussive music-making the same kind of high resolution experience that HDTV has brought to viewers.

The Mandala 2.0 retails for $349, and is available November 1. Each Mandala is hand-crafted and thoroughly tested before it is shipped.

One thought on “Synesthesia Intros Mandala 2.0, A Synthesizer With Drumsticks”