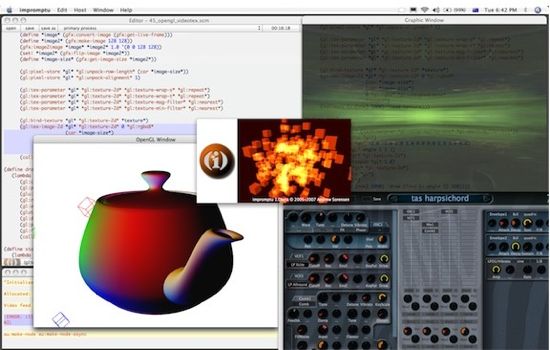 Impromptu is an OSX programming environment for composers, sound artists, VJ’s and graphic artists with an interest in live or interactive programming. Impromptu is a Scheme language environment, a member of the Lisp family of languages.

Time plays a major role in the Impromptu environment allowing accurate real-time scheduling of events and code. Impromptu is a dynamic environment designed for the creation and manipulation of running programs in live performance.

While it’s a little confusing to explain what Impromptu is and what it does, you can get an idea from the demo video below.

Impromptu is a programmable AudioUnit host. A powerful environment for creating AudioUnit graphs of arbitrary complexity with precise programmatic control over individual AU nodes. Musical material can be precisely scheduled for performance by any AudioUnit instrument node and parameters, program changes and presets can be programmatically changed on-the-fly as well as directly via the AU’s user interface.

Impromptu also includes a bidirectional ObjC-Bridge allowing Scheme to instantiate and call ObjC objects and ObjC objects to call back into the Scheme interpreter. For those times when only C will do.

Music is an addiction.