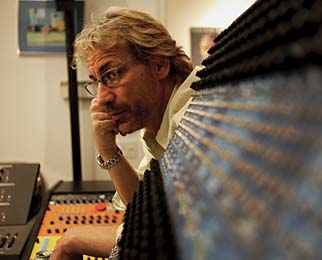 Peter Grenader, the founder and principal designer for Plan B Synthesizers, is also a well-respected composer of electronic music in the electroacoustic tradition.

He recently performed The Secret Life of Semiconductors at Analog Live, and has posted an excerpt of the piece. You can preview this below.

Here’s what Grenader has to say about the piece:

The Analoglive performance of The Secret Life of Semiconductors starts with Chas Smith fading in a high E maj triad his steel guitar using a small piece of glass to bow the strings in a sustinuto coloratura style which builds in intensity through the three massive E maj chords that follow. These first events give way to the start of the rhythmic stanza, which consists of the slow build of seven live voices from my synth (four of which were midi controlled and begin immediatly, and three others which fade in shortly afterward).

The Four midi controlled primary voices were half sine/half saws coming from the Morph Out of 7 Model 15’s. This gave the timbre a gentler feel and provided headroom to build upon as the piece continued. Over these initial elements, the first of three secondary parts fade in – a rather electronic sounding filtered part built upon two sine wave VCOs routed through two Blacet MiniWaves with their wave selection determined by a single Model 24 stepped random and then filtered by a wide-bandwidth Model 11. The second consisted of a single VCO which was pitch shifted to it’s fifth via a Yamaha SPCX90 (you can see that sitting in the cabinet underneath the synth) was faded in and out manually via a Doepfer A-192 Ribbon Controller. A third used a single ramp VCO and was picking off degrees of the E major scale via the prototype M21 Milton Sequencer which was being direction-controlled by a M24’s Source Output (it’s own flavor of digital noise). As a precaution, the bank output of the sequencer was quantized via a Doepfer A-156. I picked two of the 16 gate outputs of the Milton to trigger a single Model 10 EG which produced the slight pitch-bend heard on certain notes and adding a human-like quality of the sound .

It’s a great chance to hear some electroacoustic music from a master and to follow along with some detailed notes on his techniques.

Grenader’s full comments are available with the download at the EAR-Group site.