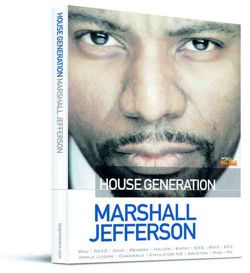 If you want to start making house music, there are probably a lot worse places that you could start than Loopmasters’ House Generation, a library taken from Godfather Of House Marshall Jefferson’s personal sample collection.

For the making of House Generation Marshall recruited the services of luminaries such as Byron Stingily and Paris Brightledge to record a great selection of classic House vocals, Chris ‘Bam Bam’ Westbrook recorded the guitars, Louie Louie played percussion, Ed Funk was on Drums, whilst Sherman Burks and Rob Crawford recorded the keyboard loops.

Perhaps one of the biggest triumphs of this exclusive sample collection has to be the recruitment by Marshall of Orbert Davis from the Chicago Jazz Philharmonic, who was put in charge of capturing an awesome selection of live House Strings and Brass Sections for the project, which we are sure you are going to love.

Marshall’s dedication to the project and musical input has resulted in a truly unique collection of rare and previously unreleased samples, which are sure to grace many hits in the future, both within the House genre and other styles. Besides being executive producer for all the artists involved in the project and writing all the main musical parts, Marshall also recorded a great selection of vocals, 303 basslines, keys, and he also did much of the editing himself, and we are all very proud of the results.

Pricing and Availability:
Available now on DVD for £34.95 plus shipping, or download for £29.95

There are a handful of men who have the title of Godfather Of House, and while many have legitimate claims to the title, because of seniority and being there at the beginning, one stands out from the crowd as being the one that actually defined not only House music, but dance music itself as we know it today. His name is Marshall Jefferson.

Marshall Jefferson – House Generation is a collection of samples produced by Marshall for producers looking to make inspired classic and future House tracks, using some of the sources that up until now Marshall has kept a closely guarded secret.

What Marshall Jefferson says about the Artist Series project:

When I first thought about doing a loops CD with Loopmasters I wanted one that had no throwaway loops – and I honestly think every single loop on this CD is a hit component.

Secondly, I wanted the ‘specialists’ – people I’ve known over the years that are extremely talented and I knew would come up with authentic House music, guys like Sherman Burks and Rob Crawford, and I just had to get the King of Acid House – Chris ‘Bam Bam’ Westbrook.

It was also an honour and a privilege getting my old friend Byron Stingily to sing on this collection. If Byron isn’t the greatest House singer ever, then he’s definitely in the top two! And Paris Brightledge of ‘It’s Alright’ fame is my all-time favorite song stylist, he’s House music’s Marvin Gaye.

Louie Louie from Chicago surprised everyone with his percussion skills, the guy was just awesome. Drums came very late in the game because I had trouble finding Ed Funk – I didn’t want to put just anyone on there. Ed came through and dropped the bomb baby, he’s so funky you’re gonna need deodorant for every single one of his loops you drop!

Lastly, months went by before I could track down Orbert Davis. Orbert used to score strings and horns for me back in the day and when I finally found him he had his own orchestra – the Chicago Jazz Philharmonic.

I was preparing for bankruptcy to pay these guys but Orbert cut me a deal that only took mortgaging 4 or 5 houses and the summer boat, so it was a go!

This Collection is going to take you from Acid to Synth House to true live Philly style House and right back to the Garage, then swing you back through the 90s and 2k styles.

All the best and crank out the hits!
Marshall Jefferson