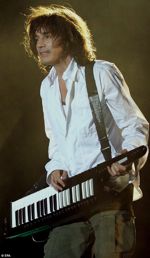 It touches on some very timely subjects, including the role of the Internet in music:

The Internet isn’t the only answer

I think that the Internet might become the ultimate marketing machine, but I also think that in maybe five years’ time, what will be cool will be not be on the Internet. I’m pretty sure that the next generation, or the next punk attitude will be not being some kind of Internet freak, but instead finding something else. I think we’re in a very ambiguous situation. When you have fantastic tools such as web TV, digital radio, YouTube and iTunes type of systems – they are not THE answer, but they do enable you to stay in contact with your fans. In my opinion what Radiohead did with the download of their album for whatever price you chose wasn’t that positive for music. I think it’s something very dangerous, it wasn’t necessarily fair on young artists. When you’re a band the size of Radiohead you can afford to do that, but for new artists these days it’s very, very difficult.

I think it’s a cynical attitude to think that musicians can survive as artists without them. Within the labels and record companies there are some really good guys who work 15-16 hour days to try to make things happen. It would be naïve to think you can just launch your album on the Internet in London and someone in Auckland would immediately know what your music is about if you don’t have the necessary distribution network. Although it’s very difficult to accept that the people that invented pirate radio in the ’60s are now the people who want to put today’s pirates in jail!