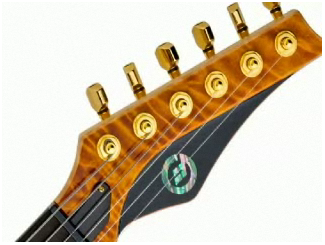 Moog Music has been pretty tight-lipped about it, but information is starting to slip out about the Moog Guitar.

At the Ethermusic Festival in Asheville, NC,  Moog’s Jason Danillo demo’d the Moog Guitar. Here’s a first-hand take on the demo:

My first impression of this instrument is that it was an electric guitar with built in (software driven) fx in the body of the guitar. And I would add, super CLEAN fx. And the infinite sustain, for example, was INFINITE with no noise, glitches, etc. However, my guess about the theory of operation was mistaken.

The guitar utilizes built-in ebows — I’m not sure how many are built into the guitar however there is a least one per string. As many readers here know, the ebow imparts energy to a string to set it into vibration and keep it vibrating forever. The engineers at Moog took things to another level — for ebow technology can do the opposite: it can be used to remove energy from a string, too.

Each string is independently settable — some can sustain, others can sound in the normal (unsustained manner), others can produce a staccatto pluck — in fact, on [sic] of the sounds is a strum followed by a bow. This is all user-settable. Jason strummed a chord and as the chord died down a “bowed string chorus” came up — as if an entire string section was doubling Jason’s guitar part.

My first thought was: Ohhh… my looping friends would LOVE this.
And the tone was really clean. During Jason’s demo, he mentioned that some people can’t believe that this is all being done on the strings until he unplugs the guitar and folks listen to the strings themselves.

Moog looks to be building on its strong line of Moogerfooger pedals and expanding into the guitar market.

7 thoughts on “The Moog Guitar”