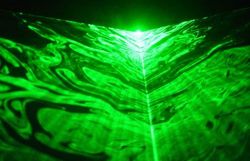 If you’re planning on going to a Russian rave, you may want to wear protective eyewear:

Dozens of partygoers at an outdoor rave near Moscow have been partially blinded after a laser light show burned their retinas, say Russian health officials. 12 cases of laser blindness were recorded at the Central Ophthalmological Clinic in the city.

“They all have retinal burns, scarring is visible on them. Loss of vision in individual cases is as high as 80%, and regaining it is already impossible,” Kommersant quoted a treating ophthalmologist as saying.

Great light shows are almost a requirement for big electronic music shows. Unfortunately, it sounds like the organizers of this light show were either irresponsible or ignorant of the potential dangers of lasers.