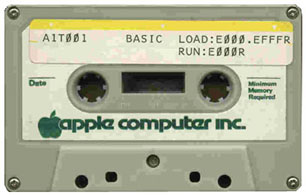 OT: PageTable has an interesting look at an audio archaeological project – reconstructing Apple 1 Basic from a 30 year-old cassette recording

At that time, it was commonplace to store programs as audio recordings on cheap cassette tapes:

The original output of the Apple I when writing the tape was a square wave, but the signal was filtered by the properties of the magnetic tape, so high frequencies were removed, and the signal became rounder.

On the way back in from tape, the op-amp of the Cassette Interface converted the signal back into a square wave by converting all samples above a certain value into 1, and all samples below into 0. While the threshold in the op-amp was fixed, it could be effectively manipulated by changing the output volume of the cassette player. Effect->Amplify in Audacity gives us the following picture:

The Apple I is extremely rare. Only 200 were built, and less than 100 are believed to be in existence.

The article made me wonder about the musical potential of this tape. For example – you could use the audio to generate triggers for synths, instead of converting the audio back to 1’s and 0’s, or to open and close a gate.

It’s also a reminder that there’s a reason we’re still using notation; today’s technology will be out of date in five years, hard to run in ten and archaic in fifteen years.