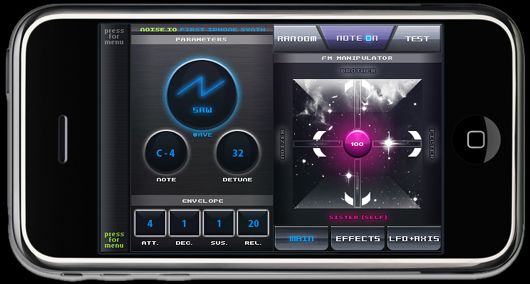 Amidio has announced Noise.io, a new app that the company is calling “the first official iPhone/iPod Touch sound synthesizer.”

Noise.io will come with 81 presets and a preset editor that lets you create and manage your own presets.

Noise.io offers ESFM (Enhanced Subspace Frequency Modulation) synthesis, which the company says is capable of producing all kinds of noises and sound effects.

Making new sounds on the iPhone is simple: you slide your finger over the device surface, and the synth changes the sound in real time. The resulting sound can be synced to BPM via TapBPM function and can be modified with sound effects like chorus, delay and flanger.

The company has working on 2 other iPhone projects:

These projects are in early alpha stage.

A VST version of Noise.io is also expected to be released by the end of 2008.