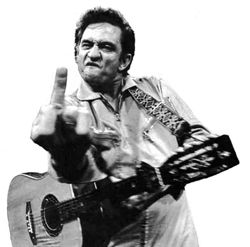 If you ever wanted to roll like Snoop Dogg and make Johnny Cash roll over in his grave, here’s your chance!

The winner of the contest will have his or her song released digitally in conjunction with the upcoming Johnny Cash Remixed album. Johnny Cash Remixed will be released on October 14. The release includes a performance from Snoop Dogg, as well as other renowned electronic musicians.

I don’t know about you – but Johnny Cash is one dead guy I wouldn’t want to piss off by making a crappy dance remix of his songs.

Detail on the remix contest below.

The ACIDplanet.com community will select the top 25 tracks from the entries submitted to the Johnny Cash remix contest. A panel of judges from Remix magazine and John Carter Cash, son of Johnny Cash and executive producer of the Academy Award-winning film Walk the Line, will select the grand prize winner.

All Johnny Cash Remix contest finalists will receive a free one-year subscription to Remix magazine. The winner will receive a membership to Audio Insider, which offers access to the industry’s most extensive network of editorial resources, direct from the teams at Mix, Electronic Musician and Remix. In addition to the digital release of the winning remix, other grand prizes include Sony Creative Software Vegas Pro 8, ACID Pro 6, Cinescore Theme Packs, Sony Creative Software Loop Libraries, and a Sony PlayStation 3.

One thought on “Remix Johnny Cash & Just See If He Comes After You!”