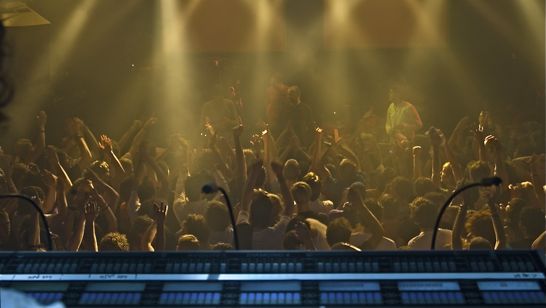 A couple of days ago, I mentioned that I’m checking out SoundCloud – a new music sharing site specifically for musicians. It’s a site that lets you upload your tracks and then share them via websites, blogs, email, Digg, Twitter, MySpace and Facebook.

I wanted to learn a bit more about how it works and see if it could be a useful tool for Synthtopia readers. So I embedded a SoundCloud drop box on the right sidebar of the site and asked for readers to send in some tracks. They’ve been pouring in since.

I promised to share readers’ tracks on Synthtopia, so here are some of the first ones I received:

Drake says “Trying out my klee sequencer – this is the first thing I did with it – very minimal setup – all analog modular stuff – no midi, all control voltages – only minimal reverb added, no other editing.”

The SoundCloud player looks great and is easy to use.

You’ll notice a difference in the way these two tracks are displayed. The Stephen Drake track is embedded with SoundCloud’s player. If a track is shared publicly on SoundCloud, then anyone can click on the track’s “share” link and email the track or get a player embed code for MySpace or other sites.

Kurt Lorenz is a graphic designer and electronic musician based in Seattle, WA. USA. Here’s his experimental track, I need you to say something profound, which features samples of Lorenz and his son:

I need you to say something profound by kurtlrnz

Gothick is a British industrial/experimental/rock band founded in 1999 by Sean Woodward. Aleister’s Amazing Bookcase is a track from the Gothick album INVOKATION OV NUIT, the first part of a free trilogy inspired by Aleister Crowley’s Book of the Law.

This instrumental and atmospheric piece is inspired by the portable collection of books that would travel with Crowley, even on his expeditions in the Himalayas.

Finally, from Athens, Greece, les.paradis.artificiels submitted the wonderfully titled, The Phantom of the Oprah, described as a “psychedelic landscape formed by a cacophony of distorted sounds and voices.” This track was featured as reader’s music “Hot Pick” in Future Music magazine #193 (UK edition)

The Phantom of the Oprah by les.paradis.artificiels

I’ll have more examples of Synthtopia readers’ music in the next few days. If you’ve given SoundCloud a try, let me know what you think of it in the comments.

6 thoughts on “Music From Synthtopia Readers”