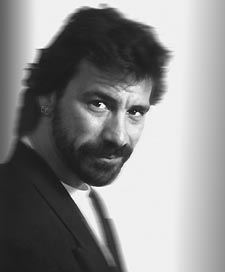 Vicmod has another great interview today, with Peter Grenader (right in his “Magnum P.I. headshot) of Plan B synthesizers.

In it, Grenader talks about how he got into electronic music.

I started early on with Electronic Music. I was fortunate, my high school had a brilliant teacher, John Waddell, who to this day gave me the best music theory instruction I’ve ever had, including CalArts. He had a friend who loaned him a VCS3, and John held a class on it. I took to it severely. I use his instruction techniques with my own students. Heavy emphasis on not only function, but the physics behind what’s happening.

One day in class John announced that a friend of his, Alex Cima, who came to our class to show his SYNTHI AKS, would allow one piece in his concert series form our high school class. Alex was a member of the local Los Angeles EM scene and a founding member of the band LEM (Live Electronic Music). He was also the Southern California rep for Steiner-Parker. Getting back to the announcement however, I devoted my life to this proposition and my piece, The Fifth Vesper, was selected for that program. Partially because of the novelty of it being composed by an 17 year old the piece got a very good review in the LA Times and I think this was a huge part of my acceptance to CalArts, the fact that I was already actively composing and my work was being selected for performance.

As far as electronics, this is an interesting story. At CalArts you could focus your composition program on electronic music. I and many others did this. OK, so…you graduate. Four years working with three massive Buchlas…what do you do when you get out? In order to acquire an axe, many of us went to work at Serge Tcherepnin’s factory on Western Avenue in Hollywood, many years before his move to the bay area. Darrell Johansen, Gary Chang, Chas Smith, Jill Fraser, Kevin Braheny were all there during my tenure. The deal was you worked for a system. I did this and in the interim got enough knowledge of electronics to be dangerous.

Later on my father suggested I go to work in the electronics field and I took this suggestion. I started off in assembly and within a couple of years became an engineering tech at a few companies and this is where I really learned how things worked. It’s there I met another mentor, Martin Bondyer who read between the lines that I really didn’t know what I was doing – at least not enough to hold the job to any satisfaction. Instead of firing me, he took me under his wing and educated me. Again, I was fortunate.

Make sure you check out the full interview at the Vicmod site if you are a fan of modular synths. Grenader reveals a few secrets about what’s he’s got up his sleeve for the 2009 NAMM Show.