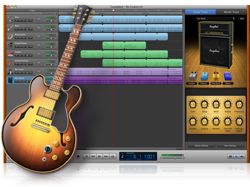 There’s not a lot to get excited about with today’s updates, with the exception of iMovie ’09, which may finally be good enough to replace iMovie HD.

iMovie ’09 adds features to let you create a movie quickly, or add refinements and special effects to your project. Drag and drop one clip on top of another to reveal new advanced editing options, including replace, insert, audio only, and even picture-in-picture or green screen. With the Precision Editor, you can skim and click on a magnified filmstrip to view clips up close and fine tune any edit, like identifying how much to keep, where to cut, use sound from one clip with video from another and more. The update also adds new titles, transitions, cinematic effects, speed changes and animated travel maps.

The iMovie updates go a long way towards addressing concerns had with the app, and should make it a much better entry level tool. In other words – it’s probably going to be the app to beat for low-budget music videos.

Unfortunately for musicians, the GarageBand ’09 updates focus mainly on turning the app into tool for selling you stuff:

GarageBand ’09, the updated version of Apple’s popular software used by millions to play and record music, now gives budding musicians a fun new way to learn to play piano and guitar. Basic Lessons let you learn the fundamentals at your own pace with Apple instructors in beautiful HD video synchronized to animated instruments and notation.

Artist Lessons feature original artists showing how to play their hit songs with everything from finger positions and techniques to the story behind the song. Choose from lessons by popular artists including: Sara Bareilles, Colbie Caillat, John Fogerty, Ben Folds, Norah Jones, Sarah McLachlan, Fall Out Boy’s Patrick Stump, OneRepublic’s Ryan Tedder and Sting. Artist Lessons are sold separately at the new GarageBand Lesson Store, available inside the GarageBand ’09 application.

GarageBand ’09 also includes exciting new guitar amp and stomp-box effects, and Magic GarageBand Jam that lets you play along with a virtual band that you create.

Not a lot there for musicians that like using GarageBand as a scratchpad or a simple DAW, except for the amp modeling updates.

On the other hand, if Apple opens this up like they have with the iPhone music store, things could get interesting. It would be great to see independently produced lessons on recording techniques, for example, tutorials on third-party plugins or just solo secrets of the synth gods.

Let me know what you think of today’s announcements from Apple.

If you really question the principle of making the technology work for you, look at what Stevie Wonder did with the synthesizer.

I mean come on, man. The technology is a tool. You have to know what you’re building to utilize the tool properly.