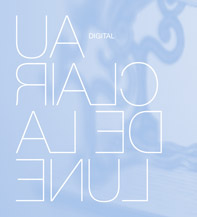 InFrequency asked the musicians to submit their own interpretations of an 1860 recording by Édouard-Léon Scott that’s thought to be the first recording of the human voice.

The free release goes along with a limited-edition two CD release of the same name. Details at the Infrequency site.

This project is a conceptual extension of breathing life back into this document through modern technology; deciphering a voice that was etched into a thin layer of oil lamp smoke, and featuring a diverse group of international contemporary composers, creating new works from this ten second piece of history.

The original recording was made by Édouard-Léon Scott de Martinville on April 9, 1860 using his own invention, the phonautograph, and consists of a series of scratches on a roll of blackened paper. Scott had never developed a way to play back his recordings and they went unheard for 148 years. In 2008, scientists at the Lawrence Berkeley National Laboratory converted the thin lines back into audio, allowing us to hear a woman singing a segment of the folk song Au Clair de la Lune.