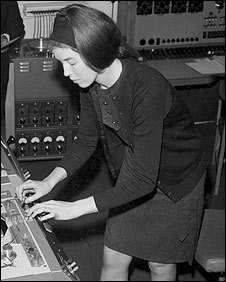 According to a BBC poll, the Doctor Who theme is the best television sci-fi theme ever. It spanked Red Dwarf, The X Files and Buffy The Vampire Slayer for top honors.

The theme has been in use in various forms since 1963. The music was composed by Australian Ron Grainer and arranged by vintage synth hottie Delia Derbyshire at the BBC’s Radiophonic Workshop. Derbyshire made use of test oscillators, primitive filters and tape manipulation to realize the piece.

For some, the Dr. Who theme is a key piece of electronic music history. For others, it’s a guilty pleasure. No matter what you think, though, it’s one of the most recognizable and memorable themes ever created.

Other themes that came in high in the poll included Star Trek, Thunderbirds, The Twilight Zone, Battlestar Galactica, Quantum Leap and The Hitchhiker’s Guide to the Galaxy.

Gratuitious embed of the original Dr. Who credits below.

2 thoughts on “Dr. Who Theme Voted Best Sci-Fi Theme Ever”