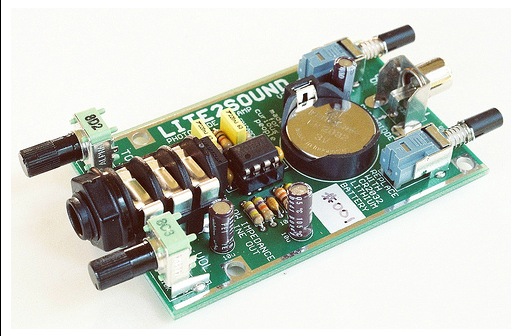 Eric Archer’s Light2Sound is a DIY project that lets you create a synthesizer that turns light into sound:

The pickup is a photodiode on 8? flexible cable. It connects to LITE2SOUND with an RCA plug. Its detachable so you can experiment with making your own pickups – just cut an RCA cable, strip the cut end, and solder a photodiode to the leads.

To hear LITE2SOUND, plug it in to a guitar amp, effect pedal, mixer, or the mic input of a recording device.

LITE2SOUND reveals unusual sounds. For instance, pointing it at a computer CRT yields a strange humming tone that varies depending on what the screen is displaying. The LED in an optical computer mouse plays strange chirping whistles. Infrared remote controls make wild bursts of noisy data. You’re hearing frequencies from lines of code executing in a microprocessor… stuff that was never intended to be heard. When you combine LITE2SOUND with a laser pointer, things get really interesting. There is bizarre audio from a vinyl record as it spins on the turntable, using a laser instead of the needle. Listening to reflected laser light as you move it over the surface texture of objects is often a surprise; it plays the texture like a phonograph needle. You can even pick up unusual sounds from a guitar string as the laser reflects off of it. There are still many things to try…

Kits start at $55. Details and audio demos are available at Archer’s site.