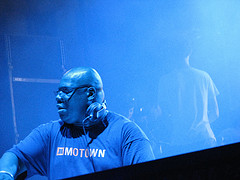 “Movement 2009 was an overwhelming success on so many levels,” said festival producer Jason Huvaere. “People loved the lineup of performances we were able to put together this year. Our sponsors and vendors really stepped up this year despite the tough economy. The recycling program surpassed last year’s totals for collected items. And we had great weather the entire weekend, which definitely contributed to the record breaking turnout.”

The announcement of Techno Music legend Carl Craig being named Creative Director for Movement 2010 dominated much of the conversation on blogs and among groups of festival-goers.

“We have received nothing but positive feedback from the announcement about Carl,” said Huvaere. “His involvement will strengthen the future of the Movement festival in Detroit.”

Craig will be involved in various creative aspects of Movement and serve as an ambassador for the Movement festival as he travels the world.

Electronic Music fans in attendance at Movement 2009 proved to be an environmentally-friendly group. Four tons or 8,000 pounds of recyclable materials were collected over the course of the three-day festival. This year’s total surpassed 2008 totals by 5,000 pounds.

Paxahau partnered again with Recycle Detroit, a non-profit organization founded by Detroiter Sarah Kubik. The non-profit had a team of 100 volunteers, utilized 40 recycling stations and successfully convinced nearly 2,500 people to commit to be more environmentally conscious.

“We were very pleased to have Sarah and her Recycle Detroit volunteers be apart of Movement again this year,” said Huvaere. “They have single-handedly taken the festival’s recycling program to the next level. Recycle Detroit is a great organization.”