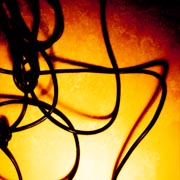 Ambient artist Robert Rich has made seven of his concerts, spanning twenty years of performance, available in downloadable digital format.

Each concert is available separately.

This release comes on the 20th anniversary of the 1989 radio concert in Paris that forms the first of these downloads. Each concert appears mostly in its entirety, lightly edited by Rich to fit under 80 minutes per set when needed. A few technical glitches are repaired, but otherwise all the quirks of live performance remain.

So, what is Live Archive, and why am I releasing it now? Live Archive consists of 7 concerts that I really enjoyed, whose recordings had a good sound quality and where I played something different from the studio. These are mixing board dubs, recorded at CD quality with my approval. Several of the concerts were completely improvised and do not repeat any studio compositions. A few of the recordings were available as radio streams, torrents, bootlegs or limited CDRs, so I wanted to give people a chance to get mastered, cleaned-up, full resolution versions of these if they wanted. A few of these concerts represent important pivots in my career, and you can hear ideas in their raw stage of formation.

So why did I wait so long to release some of this music? Well, it’s because of the realities of digital download. Back when a “release” meant a CD, and several thousand dollars invested in manufacturing, marketing, packaging and such, I wanted to keep my releases limited to the latest work. But in retrospect, some of these more improvisational moments of the past have value on their own, as action instead of object, like dance relates to sculpture. The download format also allows for longer durations. Manufactured CDs shouldn’t exceed 74 minutes. Some of these sets were 80-90 minutes long. Even now I faced a challenge to edit them down to 80 minute CDR-compatible lengths, so people could back-up their lossless downloads.

In general, I prefer to keep my release schedule sparse rather than dense. So, I am releasing these recordings all at once. I’ll treat this as a single release, although it’s 7 releases as far as the outside world may see it. Since the concerts are available as 7 separate downloads, people can decide which ones they want.

Here’s a short summary of each volume in the series:

Live Archive Volume 5
Live at Cowell Theater, San Francisco, May 12 2002
Soundscape SP018
One of the more melodic concerts in the series, opening with piano and guitar improvisations, then moving into tracks from Bestiary and other rhythmic pieces from the last decade.