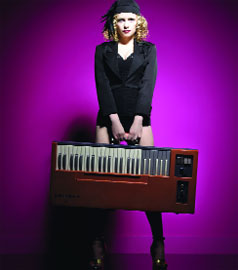 It’s been a while since we heard from Goldfrapp – but they haven’t been sitting on their laurels or dancing with the dog-headed bikini-madchen.

Alison Goldfrapp writes that they have been working on the soundtrack for a John Lennon biopic:

we have finally emerged from an intense period of work and i’m pleased i can now tell you about it (as it is official). we have written the score for a film called “Nowhere boy”. it’s about John Lennon as a boy and stars Aaron Johnson, Kristen Scott-Thomas and Anne Marie Duff. it’s Sam Taylor-Wood’s first feature film and it’s truly amazing that they gave us the oppotunity to do this.

we are all really excited about going to abbey road studios soon to record the strings with the full orchestra. the film is closing the london film festival and is premiered on 29th october at odeon leicester square. now our work on the film is almost finished, we will carry on writing the Goldfrapp album.

Goldfrapp could be a really interesting choice for the soundtrack – their Felt Mountain was especially cinematic.

What do you think? Can Goldfrapp do John Lennon justice?