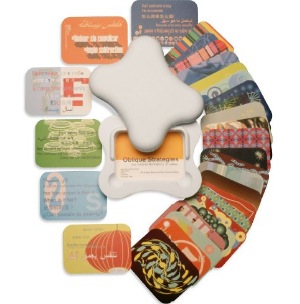 This is extra-rare fourth edition of Oblique Strategies.

Thr fourth edition of the Oblique Strategies was produced in 1996. Unlike the 1975, 1978, and 1979 editions of the decks, this version was not commercially available; it was a project undertaken by Peter Norton and his family in conjunction with Brian Eno and published in a limited edition of 4,000 distributed to Peter Norton’s close friends and colleagues.

MoMA is selling the set for $200, which means it’s a pretty special deck of cards.

Yes, I want them and no, I can’t afford them. I’m thinking about saving up for MirlitronOne’s $6 music sequencer, instead.

In 1975, Brian Eno, together with collaborators, addressed the challenge of breaking out of creative roadblocks by writing a series of evocative phrases he dubbed “worthwhile dilemmas.” These phrases, which suggest approaches to an impasse from another direction, became known as Oblique Strategies.

Originally published as a deck of cards in an austere format, they became an underground hit and sold out in three revised editions.

In 1996, as the Strategies were long out of print, Peter Norton suggested to Eno a “fourth, yet again revised, and more universal edition.” Norton edited the newly revised phrases and commissioned their translation into the six languages collectively spoken by the majority of mankind (English, Mandarin, Hindi, Spanish, Russian, and Arabic). Artist Pae White was commissioned to turn the cards’ plain black-and-white format into an extravagantly colored graphic format. The set is housed in a Corian container that is known separately as “Bill’s Bad Bone.” These strategy cards have found widespread use in dozens of countries, at writers’ desks, in artists’ studios, and even in boardrooms.