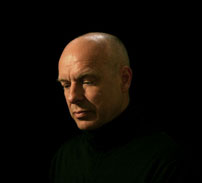 The UK’s Brighton Festival has announced that the Guest Artistic Director for 2010 will be the artist, cultural thinker and producer Brian Eno.

Eno will be curating a fascinating collection of events across the city including 77 Million Paintings, Apollo, an exclusively commissioned sound installation and speaking on several occasions. His influence will also be felt right across the Festival programme as his key interests and ideas, ranging from social creativity to climate change and the environment, to a focus on generative art are taken up by our team of programmers. These topics will weave a thread through the genres of theatre, dance, books and debate, music and outdoor events, linking together projects by some of the outstanding companies and artists coming to this year’s Festival.

Brian Eno says of the appointment “I am delighted to be part of a festival which has consistently placed itself at the cutting edge of the creative arts in Britain. I hope to be able to show some recent work that has not yet been seen in this country, and also to develop new works especially for the festival. I would like this festival to provoke and entertain – and hopefully to start some social conversations which will persist long after it has finished. Aside from all that I look forward to a few weeks living in one of Britain’s most pleasant cities!”

Would love to make it to this….

Conceived by Eno as “visual music”, 77 Million Paintings is a constantly evolving sound and image-scape born from his continuous exploration into light as an artist’s medium and the aesthetic possibilities of generative systems. 77 Million Paintings premiered in Tokyo in March 2006 and has since exhibited in 13 countries. This free event will be in Fabrica throughout the Festival.

Brighton Festival has also commissioned an exclusive sound installation that will be mounted in various public locations across the city. This will comprise soundscapes created by Eno in an amalgamation of found sounds, sonic treatments together with his own unique musical composition.

The contemporary ensemble Icebreaker will perform a music arrangement of the 1983 album Apollo (Atmospheres & Soundtracks) by Eno live to the film of the original NASA footage of the Apollo moon landing.