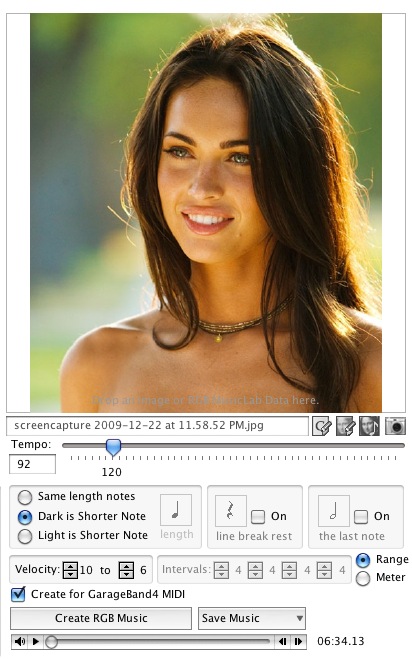 Kenji Kojima’s RGB Experimental Music Laboratory is a free app for Windows and Mac that lets you translate images into music:

RGB MusicLab converts the RGB (Red, Green and Blue) values of an image to chromatic scale sounds. The program reads RGB value of pixels from the top left to the bottom right of an image. One pixel makes a harmony of three note of RGB value, and the length of note is determined by brightness of the pixel. RGB value 120 or 121 is the center C, and RGB value 122 or 123 is added a half steps of the scale that is C#. Pure black that is R=0, G=0, B=0 is no sounds.

It is not an impression of a painting or a photograph of a musical variation. It is not an arbitrary process. It composes a score from an image directly. It is simple and clear algorithm, and does not have any hidden or mysterious tricks. Anybody can get a same result if he/she takes same processes.

We decided to give RGB Experimental Music Laboratory a try with an image of Megan Fox. She’s the sexiest woman alive*, so we figured the results might have a better chance of sounding good.

While RGB Experimental Music Laboratory automatically translates images into musical notes, you have control over how this is done.

For example, you can force generated notes to specific scales or custom scales, you can control the tempo and you can assign instrumentation.

Generated music can also be saved as MIDI or AIFF and then used as source material in other applications. We experienced crashes when saving as AIFF, but had no problem exporting to MIDI.

If you give it a try, let me know what you think of it!