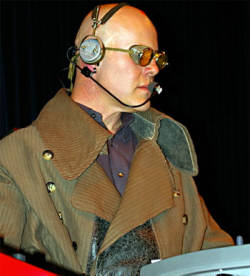 It sounds like Thomas Dolby may still be Blinded By Science – at least the the science of women’s underwear.

Dolby notes in latest blog post that it’s bloody cold now in England (same in the Midwest) and that he’s been waking up with his long johns “around my ankles, and my underpants were wrapped round them in the most curious way.”

His confusion over this sad state of undergarment affairs led him to reflect on how woman do those things they do.

This led me to thinking about women who are able to take off their brassière without removing their top.

Who invented/discovered this awesome trick? Was it perhaps some feminists in the 60s who felt it added drama to the bra-burning ritual?

And is there indeed a whole slew of other cunning manoeuvres women know about and don’t share with us?

Are you all out there sniggering over my longjohn puzzle, thinking to yourselves “ah, Dolby’s stumbled onto Womens’ Underwear Manoeuvre #37??

Dolby’s hit on something here – and “cunning manoeuvres women know” gets my vote for the title of his next song.

You have to find your own way to learn…..There’s no shortcut.

I’m no accident……You have to practice and you have to study.