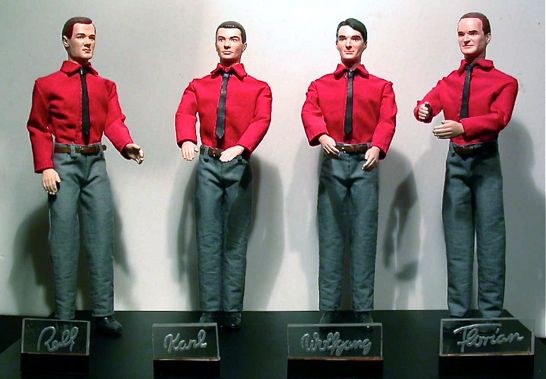 As much as you might like to get your own set, though, they aren’t available for purchase.

I collect Kraftwerk records since about 1993. I’m a real fan of them!

I’ve bought some old Mattel Ken figures (that guy from Barbie, you know) at flea markets, “decapitated” them and sculpted the Kraftwerk heads to apply them onto the bodies.

First of all I sculpted them and then I built moulds and casted them with resin.

Then I realized how hard it is to get some clothes for Ken – even in good toy stores!

So I had to sew the red shirts and grey pants on my own – horrible work!

Thank god I found some black shoes at the flea market!

Who else wants a set of these?

Too bad about the four Kens, though.

41 thoughts on “Kraftwerk Action Figures Made From Decapitated Ken Dolls”